How to Check the Concrete Footings for Your New Home

Installing concrete block foundation walls over concrete footings is a common method of getting the concrete slab raised above grade, in our area of the country (central Alabama).

On home sites that are fairly level, a "monolithic pour" is sometimes used.  In this method, the footings and slab are prepared and poured all at once, instead of in two pours when using block foundation walls.  With either method, the laying out, and comparing the footings to the foundation plan, are very similar. 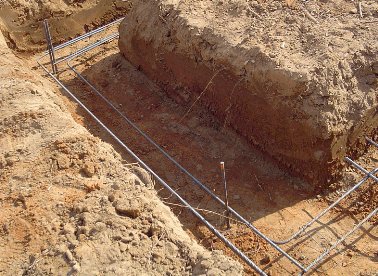 The foundation must first be laid out on the property, and carefully checked.  After the footings are dug, the reinforcing steel ("rebars") is installed. Wire "rod chairs," sold in boxes of 100, support the steel rebars. There should always be 2 to 3 inches of concrete covering the steel rebars to protect the steel from moisture that will cause the steel to rust, expand, and weaken the bond between the rebars and the concrete. 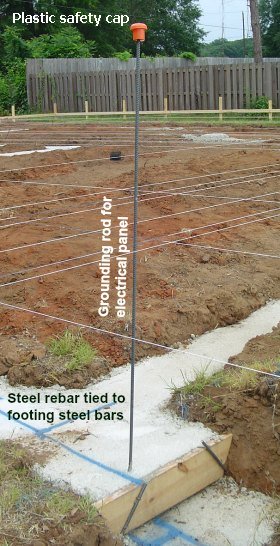 The rod chairs hold the rebars off the bottom of the footing, and keep them aligned properly. Wire ties, with a loop at each end, are used to tie rebars to each other where they overlap, and to tie the rebars to the rod chairs. If you look closely at the photo above you can see three or four rod chairs supporting the rebars.

If you will have non-metallic water piping, you must install a grounding rod for the electrical system.  The photo on the left shows one of these rods after the footings have been poured. This is typically a rebar tied to footing steel, and turned vertical to stick up out of the footing.  The bar must be placed so it sticks up in a location that is about the center of where a stud wall will occur.  Setting the grounding rod near the electrical panel location makes the final connections much simpler, so think through where the electrical panel will be set.

Wire ties come in a bundle of several hundred to one thousand ties. One bundle of wire ties and one box of rod chairs will usually be enough for a slab of around 2200 square feet with a double garage. 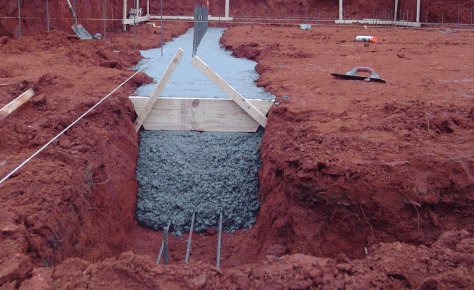 Concrete footing being poured, with footing step.  How 'bout that Alabama red clay?! 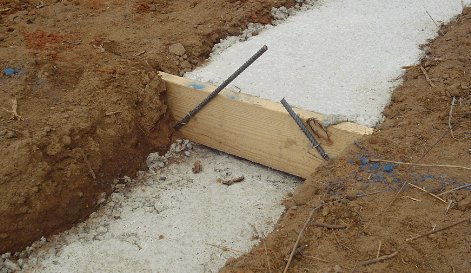 Short sections of 2x8 lumber are used to form 8-inch steps in the footings where the grade slopes. This allows the footings to step up or down in 8-inch increments, which work with 8 inch high concrete blocks. You can see how this works in the pictures above. You may have a situation where an 8-inch footing step is too much. Concrete blocks are also made 4 inches high, and are commonly called "half-highs." These work well with 4-inch footing steps.

As usual, we wish you the very best in managing the building of your home!

Plumbing in a Slab 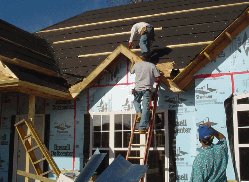